Is Disney Plus on PS4 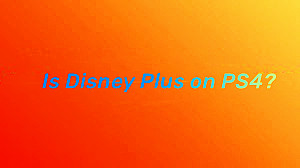 How to get Disney Plus on PS4? Everyone is moving and technology keeps advancing as the days go by. Some years ago, we could only get to watch TV shows and movies on Television. However, things have changed, and of course, currently, you don't need a TV to watch your favorite movies.

With the advent of digital streaming, many people had no option but to cut down cable TV and switch to digital platforms. Today, you can stream HBO titles, and Marvel (Disney) tittles on various devices, including your PlayStation 4 console. Streaming is now supported on new game consoles, including PlayStation 4 and 5 from Sony, and Xbox series X from Microsoft.

Yes, you can download the Disney+ app on your PlayStation 4 and stream on the network, based on your plan. Disney Plus is officially available on PS4 and PS5. However, it is impossible to get Disney plus on PS3 right now.

It’s a straightforward process irrespective of your PS4 model. Interestingly, it’s not just Disney+ that’s available on PS4, other premium networks like Hulu and YouTube are legally supported on PS4; you can stream these networks from your PS4, and there’s absolutely no need for purchasing an external hardware streaming doodle.

To get started, it is important to note that you must have an active Disney Plus account, which means you have a running Disney+ plan to stream content from the platform.

Boot your PS4 console and visit the PlayStation Store. Search for the Disney Plus app using the query “Disney+” or “Disney Plus.” Follow the instruction to install the app on your PS4 console. The app itself is available for free and it is lightweight.

Once installed, launch the Disney Plus app on your PS4 console and sign in to your Disney+ account using your verified credentials. If you’re new to the network, sign up for a new account using a valid email address.

After you have signed in, search for the movie you want to watch and start streaming with your PS4 console. The Disney Plus app for PS4 is similar to the one on Smart TV; you're getting the same intuitive interface; however, the quality differs based on a number of factors.

If you're connected to a stable internet network, by default, you will stream Disney Plus in HD quality on your PS4. Also, 4K Disney+ streaming is supported on PS4 Pro and newer models; although you will need a network speed up to 25Mbps.

If you upgrade to PS5, to get Disney Plus on your console, follow the steps explained above as they apply to both the PS4 and PS5 consoles. More so, if you need to install other apps on your PS4 console, visit the PlayStation Store and search for the app.

You will find Hulu, YouTube, Netflix, and a bunch of other applications that will work on your PS4 console. However, there are free and paid apps; if you want to install a paid app, you will be prompted to pay for the price first before it is added to your PS4 console.

But, as for streaming apps, including the Disney Plus app, you can download them for free but must need to subscribe to a plan offered by the company before you can use the app.

Regardless, it is important to note that Disney Plus is not available worldwide; hence, if you live outside the supported regions, you won’t be able to get it to work on your PS4 console.

Once in a while, you will need to update the Disney Plus app to add support for new features and bug fixes. If you want to update Disney Plus on PS4, follow the steps below.

On the home screen, highlight the Disney Plus app, and press the Options button on your controller.

Select “Check for updates” in the menu options that would appear on the right pane. If an update is available, you’ll be prompted with a message, press “X” to get into the updates download page.

Select the latest version of the Disney Plus app for PS4 and press the “X” button again to start downloading. When the update download is complete, you’ll receive a prompt message.

Well, if you’re on an unlimited network plan, you can set automatic updates for all your PS4 games and apps. These steps explained above also apply to PlayStation 5, and for updating your PlayStation games.

1.3 What's The Cost Of Disney Plus Streaming on PS4?

The Disney Plus app is free on PS4; however, you will have to subscribe to the Disney Plus plan, which goes for $7.99/month or $79.99/year. But, Disney+ typically runs discount promos from time to time and there are chances you could get the plan for $6.99/month or $69.99 per year. Once you have an active plan, just download the Disney app on your PS4, sign in, and start streaming, with no further fees.

In most conditions, Disney Plus works smoothly on PS4, but sometimes the Disney Plus on PlayStation 4 can encounter random errors. What is even worse is that there is no particular reasons for that. But is there anything else you can do if you encounter problems like this? Of course!

First, let’s start with the basics - check your Disney Plus servers. To do this, you may need a third-party service like Downdetector to help you. This is a website that can gives you information about the current status of applications, such as Disney Plus, Netflix, and more.

Second, try watching another show to detect whether this issue is with the entire platform or just one specific show on Disney Plus.

Third, lower your streaming video quality if Disney Plus doesn’t work on PS4. Sometimes the video will keep buffering if its streaming quality is too high.

Fourth, check and reset your internet. The internet condition should also be considered. That’s because if your network connection runs very slow, it may also cause the issue of Disney Plus not work on PS4.

But, what is this "right tool?" Simply, it is the StreamFab Downloader. This software is a professional tool designed for everyone that has or uses a computer system. It features a powerful hardware engine for fast-speed processing.

The StreamFab Disney Plus Downloader helps you to download unlimited movies from the Disney+ streaming network. It supports 720p quality and 5.1 audio; so, your downloaded movies will playback on any screen with stunning clarity.

Interestingly, this software grabs both the subtitles and meta info of Disney Plus movies. It is simply a powerful and fast Disney video downloader for everyone, thanks to its intuitive interface.

2.2 How To Use StreamFab Disney Plus Downloader

First Step: Download and install StreamFab Downloader on your system.

Second Step: Launch the program and click on “VIP Services” on the left tag.

Third Step: Select Disney+ from the cards of supported premium streaming services. Sign in to your account and search for the movie you want to download.

Fourth Step: Once the video starts playing, StreamFab Disney Plus Downloader would start downloading it immediately.

To view all the Disney Plus movies you’re currently downloading with StreamFab Disney+ Downloader, click on “Task Queue.”

More so, Disney Plus streaming is supported on PS4 via the Disney+ app for PlayStation. Asides from PS4 consoles, you can also get Disney Plus on Amazon Fire Stick, smart TVs, Roku devices, and many other streaming devices.